The 6 Most Optimistic Gay Mormon Moments of 2012

A repost of my Huffington Post article that appeared in January of 2013. Worth a repeat! 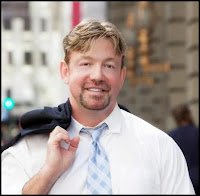 I’m a big believer in positive reinforcement. When I was in 6th grade, my teacher talked me into signing up for the basketball team he coached. I was lousy—but he kept a patient eye on me, corrected me when I was wrong, and instilled in me both the belief that I could do better, and the desire to do so.

The next fall when I entered 7th grade, I signed up for basketball once again—and just between us, I was still pretty lousy. But my new coach was a different breed than my former coach had been—and he had a completely different philosophy. Instead of encouraging me and reminding me what I’d done right, he derided me and criticized me in front of my fellow teammates. Eventually, shamed and humiliated, I left the team—and ultimately the game altogether.

In retrospect, both coaches taught me a valuable lesson: When you want someone to succeed and get it right, gently correcting and encouraging them is going to go a lot further than angry insults and humiliation.

Institutions—since they’re also made up of humans—tend to respond the same way we do as individuals. That’s why I think it’s important to recognize institutions, like the Mormon Church, when they take positive steps toward better understanding LGBT individuals both in and outside the faith.

As an openly gay, active Latter-day Saint serving as a priesthood leader in my local congregation as my authentic self—an openly gay man, I’m keenly interested in how my church understands LGBT inclusion and equality. Don’t get me wrong—I’m among the first to realize that we have a challenging road ahead of us—and have no problem pointing out areas where we’re still weak.

But I also know this is going to be a long game. So I’m borrowing a page from my 6th grade basketball coach’s playbook, and giving praise for what I think are the most optimistic gay Mormon moments of 2012—in the hopes that my faith continues to move forward with Christ-like love and full inclusion of its LGBT members.

Because that’s where our Savior wants us to be.

Mormons Building Bridges emerged onto the scene earlier this year, with a stated goal of conveying love and acceptance to LGBT individuals, both in and outside the faith. Throughout the year the group hosted and participated in a variety of activities to build those bridges—ranging from local community meetings, to partnering with Ogden OUTreach Center for a homeless gay youth placement program, and marching in Pride Parades across the country.

Mormons for Marriage Equality actually went a step further, and actively coalesced Mormon and interfaith allies to actively campaign to support gay marriage initiatives in several states across the country this year—helping ensure a big win for LGBT marriage equality in 2012.

2.      Straight allies and LGBT Mormons march in over twenty Pride Parades across the globe—including Santiago, Chile.

You can get a sense of the magnitude of these events here. When I led the San Francisco Pride contingent, we were joined by some friends from NBC. Later that evening over dinner, one of the producers—who had little previous experience with Mormons—shared that this was among the most spiritual events she’d ever witnessed. The looks of shock from the onlookers as we marched behind a banner that said, “Mormons for Marriage Equality” were replaced with tears, hugs, and heartfelt “thank-you’s” from both sides. Healing has begun, and just maybe the ugliness of our involvement in Proposition 8 is beginning to mend.

3.      Family Acceptance Project releases LDS booklet that helps Mormon families and leaders understand how to respond to gay youth and young adults in ways that keep them safe and healthy. 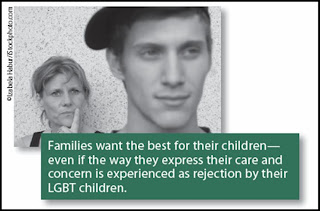 It’s no secret that the suicide rate of LGBT Mormons is significantly higher than the national average, and for decades Mormon parents of gay youth have felt compelled to choose between their church and their children. But now we have evidence-based science blended with the best parts of the Mormon faith that helps parents realize they don’t have to choose, and gives them specific behavioral guidance that will help keep their families together, and help protect their children from significant health risks—including depression and suicide. Coauthored by a former Mormon bishop (and active member) and now being used by many congregations across the country, this is a big stride forward for the safety of LGBT Mormon youth.

4.      The Mormon Church launches a website talking about LGBT issues inside the faith.

The release of mormonsandgays.org was a big step for a conservative organization like the Mormon Church. And while it’s not perfect, wrapped inside some of the vignettes are glimpses of genuine understanding and Christ-like love. True, there are still some challenges here—such as the lack of any clear call to action or resources to help protect gay kids—but the Mormons may be among the only major conservative faiths to have a web resource for leaders and families. It’s a small step—but small steps matter. They add up.

Reid, among the highest ranking Mormons in the U.S. government, evolved his position and came out in opposition to the Church’s official stand on gay marriage. "My personal belief is that marriage is between a man and a woman. But in a civil society, I believe that people should be able to marry whomever they want, and it's no business of mine if two men or two women want to get married," Reid said. And maybe the best part is that by taking a stand, Reid gave other Mormons permission to stand for the right thing, as well.

6.      LGBT and allied BYU students come out in support of their LGBT brothers and sisters in an “It Gets Better” video series.

Showing how attitudes are changing among young gay Mormons and how they understand themselves in relation to their faith—and demonstrating the support of their straight fellows—these first videos spurred additional participation by BYU students, and the videos themselves went viral across the planet and generated national media attention. 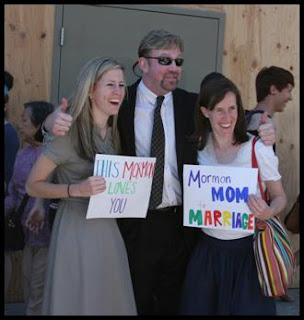 There you have it—my top picks of the most optimistic gay Mormon moments of 2012.

This certainly isn’t an exhaustive list—and it certainly isn’t perfect. But given the Mormon faith’s painful history with the LGBT community, I think it’s a pretty good year when we can look back and come up with any reasons to be hopeful—let alone a half-dozen.

All this makes me wonder what would happen if we in the LGBT community were a bit more like my 6th grade basketball coach, and the next time we ran into a Mormon we said something like, “Hey, thanks for showing up to march in Pride!” or “Nice job on the website—it’s important we start talking about these things.” Maybe we’d instill in the Mormon community what my coach instilled within me: The belief that we can do better, and the desire to do so.

Then maybe next year we’d have even more hopeful gay Mormon moments.
Posted by Mitch Mayne at 5:52 PM 4 comments: