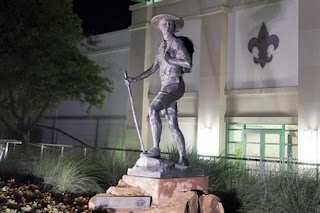 On Thursday, May 23, Boy Scouts of America decided to lift a ban on openly gay scouts that had been in place throughout the organization’s 103-year history.
I'm pleased that the BSA decided to approve the measure to lift the ban on gay scouts. Like the steps the Mormon Church has taken in recent months, it is encouraging to see movement in the right direction.
One of my favorite life lessons I learned from a fictional character, Atticus Finch from "To Kill a Mockingbird." Atticus, you'll recall, was the white attorney who represented black defendants in an Alabama murder trial. The lesson I learned from Atticus Finch was that change happens incrementally. As much as we'd like to believe humanity is wise and kind enough to right decades (and sometimes centuries) of wrongdoing with a single grand event, it just doesn't happen that way. While I believe humanity will always make progress, it will be progress in spirals. Progress and change are a process--and with this victory we can clearly see that the process has begun.
Yet, still embedded into Scouting policy and culture is the message that as a gay youth, you might be okay when you're young, but rejection is imminent. And as we now know, profound evidence-based research done by The Family Acceptance Project tells us rejection is the leading risk factor for LGBT youth when it comes to health issues, including depression and suicide.
Moreover, because gay leaders would be banned from working with youth, there is a message here confusing being gay with pedophilia, and once again, science has borne out that those are two very different things. It’s as if Boy Scouts of America believes that while we might be marginally acceptable as youth, upon our 18th birthday a magical switch is flipped transforming us from being part of the family of humanity and into sexual predators.