Progress, not perfection: More on changes to Mormon Handbook

The recent changes to the Mormon Guidebook on homosexuality are receiving a lot of press--and in some unusual places. 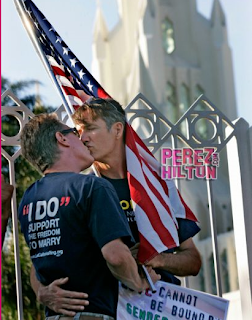 Surprisingly, one of the more moderate (and I think accurate) assessments of the changes was on Perez Hilton's website, where I was quoted as saying the changes are a step in the right direction--to which Perez agreed.

Additionally, the Human Rights Campaign (HRC) issued a release today where they claim the Mormon Church now views same-sex attraction as "normal." The title of the release ("Mormon Church: Same-Sex Attraction is Normal") really doesn't do the article itself justice. While, for the first time, the Mormon Church does not advocate reparative therapy for homosexuality, it still is reduced to a sexual act, and a sinful one at that. The comments in the HRC article itself take a more temperate tone than the title--which leads me to believe they might need a little copy editing help. :-)

Of course, there are countless nay-sayers out there who still call for complete doctrinal change within the church. And while many would like to see that happen, I think it's important to walk before we can run--and equally important we acknowledge the small, but positive steps the Mormon Church is taking around the topic of homosexuality.

It matters less how quickly we're moving, and more in what direction our feet are pointed.
Posted by Mitch Mayne at 5:02 PM