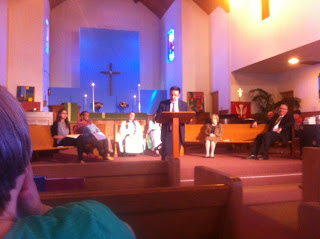 We owe a special debt of gratitude to Michael for helping us secure locations, and make deep connections into the interfaith community that helped create a pretty amazing spirit of cooperation between those of different faith traditions that share a common underpinning: the belief that we are all fellow children of God, and are all equal in his eyes--regardless of gender, orientation, ethnicity, or any other marker we use to define differences between ourselves and others.

I share Michael's remarks with you below (with his permission), and wish to say publicly how much I admire this mans integrity, courage, and kindness. I'm proud to call him a friend.

You can also view a video of his remarks here: http://www.youtube.com/watch?v=hBiQpbiTCGM&feature=youtu.be

Please rise… Now, everyone smile (takes photo)… I want to capture this moment in history! Thank you!

Don’t you remember, growing up, when the family was together, some enthusiastic relative would always pull out a camera, interrupt a precious occasion, ask you to paste a smile on your face, all in the name of capturing an image that would be talked about for years to come. The significance of that photo was two fold: first, it proved that the event actually occurred in history and, second, it became the reference point for the lore that would be created around what happened at that event, a lore that would become part of your family’s oral tradition for as long a that photo existed.

If I know anything about my family’s history, it is precisely because I spent precious time with my grandmother of blessed memory, turning the pages of a worn photo album and learning the history that I would be called to honor, steward and pass down to my progeny.

To look at those photos and the smiles on everyone’s faces, one would think that everyone was always happy. I suspect part of the very intention of taking those photos was to create a perception that we sorely wanted to believe. Those photos gave us license to veil, if only for a moment, the real dynamics of the collective subjects in those portraits.

In reality, those dynamics are our real inheritance and until we can come to terms with them, wrestle with them and make some difficult choices, we can’t really grow as family.

For the family gathered here today, this day is, in reality, a Kodak moment. It is a historic moment and it is a courageous moment.  For the past couple of days this family has gathered in a safe and sacred space to wrestle with issues of both religious doctrine and intensely intimate and personal sensitivities.  What is also significant about this moment is the fact that you have not convened in isolation. Gathered in this sanctuary are LGBT Mormons who have traveled at great expense and distance from throughout the nation, welcomed by respected members of the local stake.  But it’s not just those of us gathered here at St. Cyprian’s, for whom this conclave bears significance. Dear friends, the greater LGBT community, Mormon family, and I dare say the world is watching. They will see the photo we just took and await with great anticipation for the narrative that will emerge from this weekend. 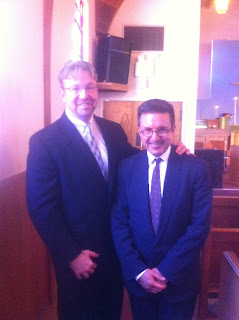 Why this is such a historic moment is because those assembled here today love their Mormon family too much to walk away from it. What is historic about this moment is that at the core, there is a profound recognition that parents do feel great pain when their children hurt. You are here today because you care about your faith and realize that unless you struggle with key issues as a family, your family will not be what your faith calls it to be. On this note allow me to draw from the sacred text of the tradition in which I was raised. Saint Paul, with whom I confess to often struggle, makes an insightful observation, “When one member of the Body hurts, the entire Body suffers.” Although times change, dear friends, human nature remains the same. How on-the-mark St. Paul, the great missionary, speaks to the current state of families and communities of faith.

But times do change and advances in academic thought and innovative technology challenge us not only to evolve, but for our faith beliefs to pastorally respond to the rapid pace of such progress. Change is not easy and for many it is an uncomfortable, if not painful, experience and necessity.

Some in this sanctuary will remember the days when, to simply take a photograph, one had to go out, purchase and load film into a camera, wait until the role was fully taken, then drop the canister at the local photo shop or pharmacy and wait a week or more for the film to be developed. If you wanted to share those images with others you had to pull out your bulky album or carry those glossies in your wallet or purse. Now, in an instant, on your phone, not only can you capture an image, but in the same nano-second, also email it to your mother and upload it on Facebook to share with your 1,000 plus most intimate friends.

Just as academic thought and innovative technology have evolved, so too have people and communities of faith. What I am about to say is not exclusive to any one faith tradition…but please hear me out. Once imprisoned, yes imprisoned  by the fear and shame espoused in the name of religious doctrine, so many, myself included, have come to the realization that life is too precious to waste; That the God who created us does not make mistakes and would never be so cruel as to create us for a life of pain or of any less value than anyone else created.  We have come to the realization that each of us is the unique, special and precious creation of God. In moments when struggling with the selective execution of doctrine, in the faith in which I was raised, I recall the words of my learned professor of Dogmatic Theology on the first day of class. Simply, in his broken English, he stated, “All theology is pastoral.” That is to say, the acid test of the validity of true doctrine is whether or not, like a good shepherd, it leads us to the Kingdom of God.  I would hope and pray that such an acid test, when it comes to religious doctrine, would transcend confessional boundaries.

Friends, show us what it truly means to be a Mormon. To those who do not know better, at best, yours is a curious, if not strange faith. To be brutally honest, at worst, some go so far as to consider it a cult.  In the minds of the ignorant, well-groomed missionaries, Big Love and polygamy are all they know about you.  You know what it is like to be the victims of suspicion and prejudice, what it is like to be alienated from society. Precisely because you know and feel such pain, you also have the capacity to empathize with the pain felt by those within your own community who have been victimized and marginalized because they are perceived by the mainstream as different.

Dear friends, take a moment and look at the person next to you, in front of and behind you. This is a profound Kodak moment. Not only are those here present going to take home memories from this convening, but your community of faith and I dare say the greater community is watching to see where this will go. What do you want them to see? What message do you want to send, not only to one another and the world, but also to your children and grandchildren? This historic moment is yours! Let it be a shining moment! …And as you contemplate these pressing questions and challenges, remember that the antithesis of fear is courage, the antithesis of pride is humility and the antithesis of hatred is love. These greater virtues will be essential to employ if change is to be effected and the family is to be healed.

God bless you and God keep you.