Commentary from a straight ally marching in San Fancisco Pride 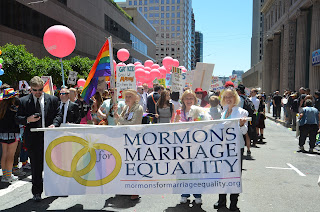 On Sunday, June 24, over 100 LGBT Mormons, their families, and allies marched in the San Francisco Pride Parade. A friend of mine from my home ward in Oakland shared this letter with me describing her experiences that day.

With her permission, I share it with you here. I think one of my favorite things is her closing--"Thank you, LGBT community, for making Mormons feel welcome among you. Let's see more of each other."

Couldn't have said it better myself.

You can read more accounts of Mormons marching in San Francisco Pride here:


The Bloggernacle "It's all about the hat"

Today I marched as a member of Mormons for Marriage Equality in the SF Pride Parade.  I was a bit concerned about the reception from the LGBT community and the parade viewers would be.  To my delight, the crowds were warm and accepting of - and even enthusiastic about -  my group.  Some people looked delightedly surprised to see us.  After the parade, as I settled my aging body into my BART seat for the trip home, a lesbian mother sat down next to me with her son on her lap.  I apologized for not giving her son my seat because I was aching from marching.  Her partner, who was standing in the aisle, asked me what contingent I was with.   I said, “Mormons for Marriage Equality.”  She responded with, “That was the group I came to see” and gave me a thumbs up. Her comment made my day and my marching (and the aches and pains) worth my efforts.  Thank you, LGBT community, for making Mormons welcome among you.  Let’s see more of each other.